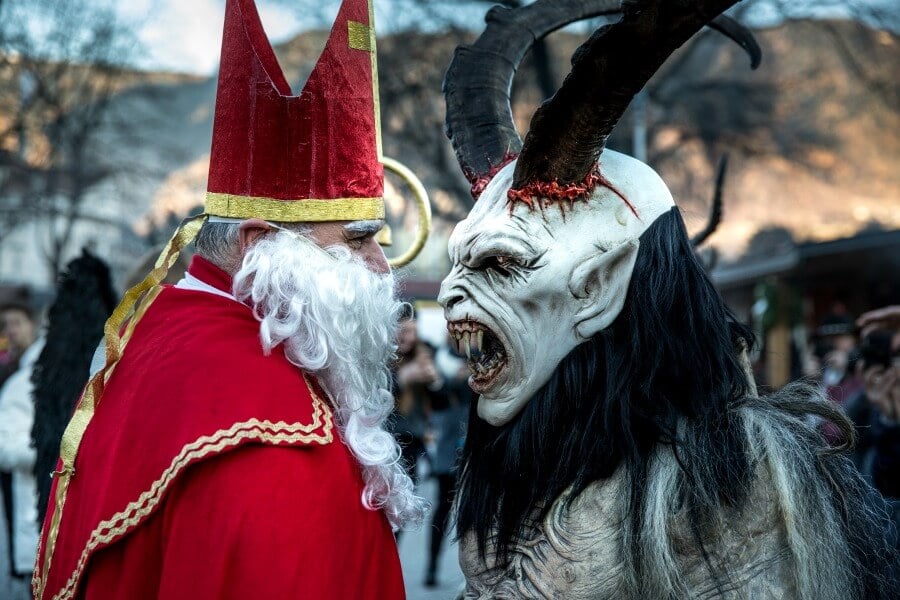 Whether they heard, saw or sensed them first, we could not tell. But the children knew.

They knew what the descending darkness summons in December. When night falls fast and the biting cold hits you like a fist. When the winds of the Alps cast a spell of dread unto the land.

Indeed, the children knew well before the rest of us: something wicked this way surely comes.

Beware of the Din in the Dark

A clatter of cowbells stirred somewhere in the distance. Three kids next to us gasped, scattering to a wooden fence lining the snow-stomped path. They scuttled onto the bottom rail straining to peer into towering shrouds of timber.

The clamor of bells grew louder. More gasps spread through the little ones. A tangle of fear and excitement tightened around us. And then we spotted them.

First, as long shadows twisting and contorting in the flickering lantern lights. Then as silhouettes with devilish horns that could only have been forged in the fires of hell.

Remaining in the path of this looming evil was not wise. We dashed to the fence. No way were we going to be caught in the chaos of Krampus in South Tyrol.

But it did not matter. Soon they were upon us.

We shrank as wolf fangs and serpent tongues flashed out under lantern glow. Switches made of sticks lashed against our legs as they rushed by. Each blow sent a stinging reminder to remain on the favorable side of St. Nicholas during the Christmas season. The message was duly noted. 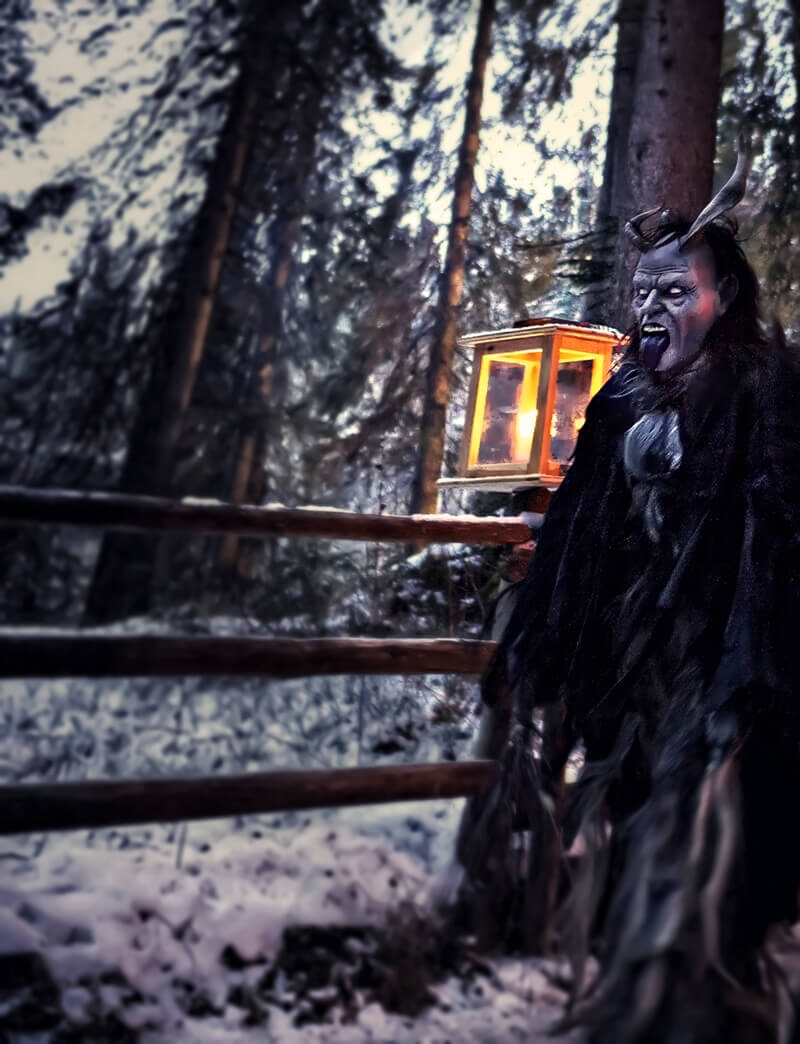 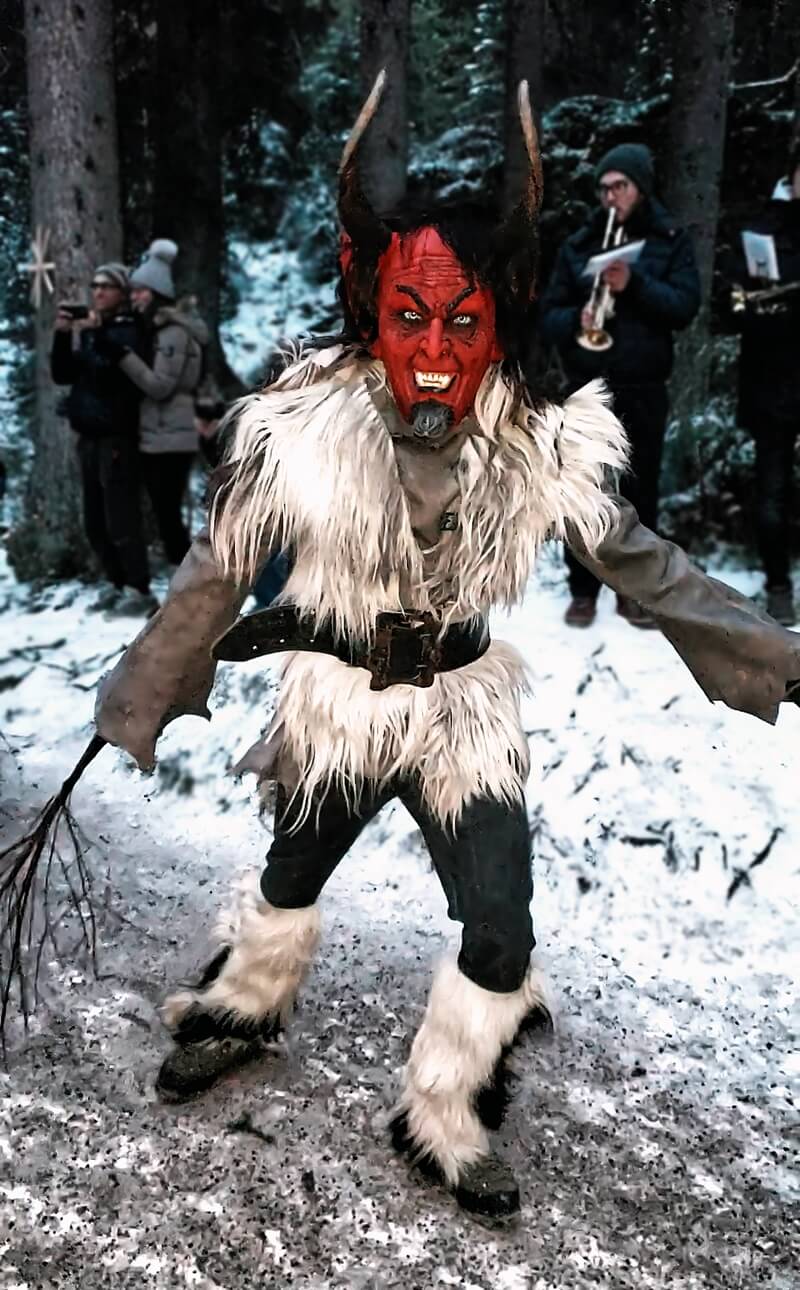 The parade of Krampus poured into the night until no child was left unscared. We were blown away. Our first Krampus experience at the Christmas Market of Lake Carezza was everything we hoped it would be. At once a terrifying and oddly thrilling spectacle. Afterward, we calmed our pounding hearts with ample cups of Glühwein.

But our time with the beasts of ancient lore was not over. You see, once you’ve survived the Krampus, the thrill of meeting more only grows. So a few nights later we went to Margreid, an ancient wine village in South Tyrol’s Unterland, for the second oldest Krampus celebration in South Tyrol.

Wherever the Krampus May Roam

We snaked our way into a group of revelers gathering in the village square. The medieval facades surrounding us seemed to close in as we studied the darkness yawning from a damp cobblestone street. There was to be no escape. Like before, the children stared wide-eyed ahead. But the black of the night only stared back. Then it began.

Fire belched into the sky and lights red as blood painted a billowing mist moving toward us. A tribal beat thundered in the air. The crowd began to run. We stood frozen.

Materializing before us in the gloom was a Krampus the Devil surely spawned himself. Four immense horns rose like a crown from a hulking figure covered in gnarls of fur not even a grizzly bear would dare groom. 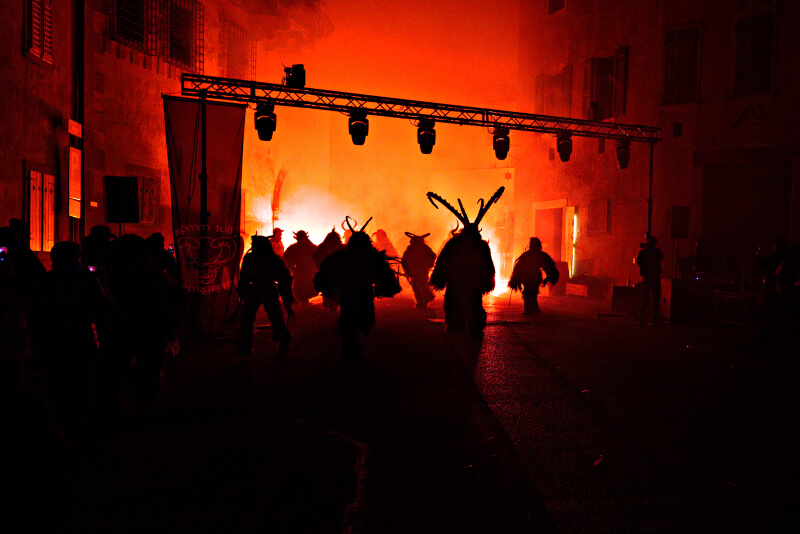 We were not about to stick around to see its tortured face. Besides, falling victim to a switch from a Krampus this size was not on either one of our holiday wish lists. We scattered to the side of the street, but like before, it was no use. Another hoard of Krampus found us.

Stings shot up our legs again as a blizzard of switches tore through the street. Clearly, behaving like a saint since our last Krampus encounter was not enough for jolly ole St. Nick.

But we were the lucky ones. A Krampus hunted down a young man nearby. Its switch swatted the lad into an awful dance as he tried to avoid the blows. We didn’t know his offense, but he must have spent the better part of the last year up to no good. Next to him, another Krampus lurched at a little girl who instantly burst into tears — guaranteeing she would never sneak another treat from the cookie jar again. 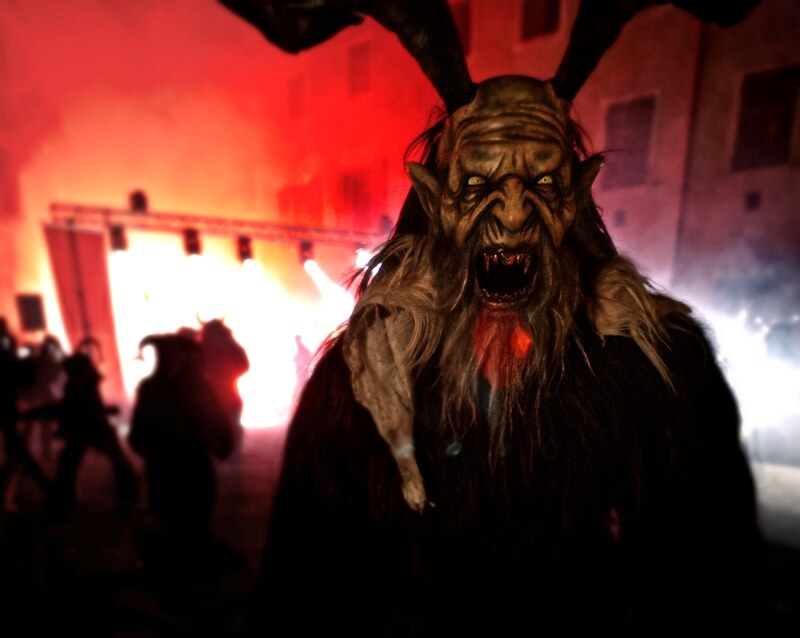 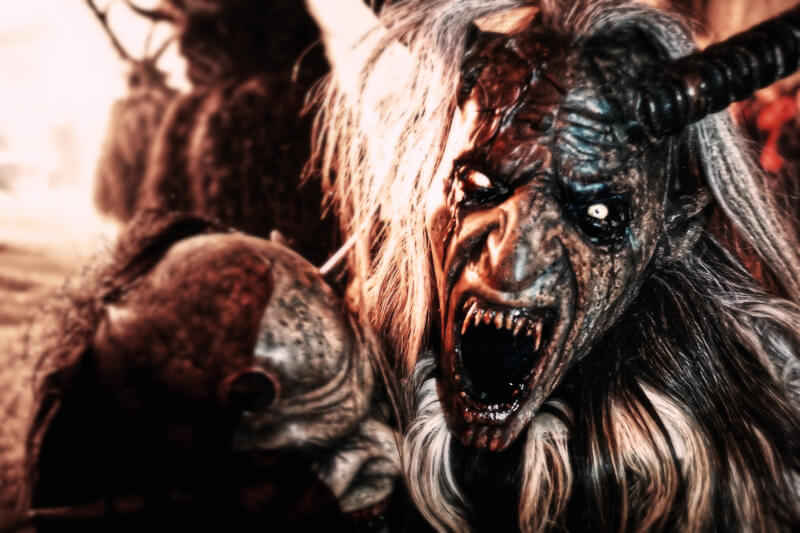 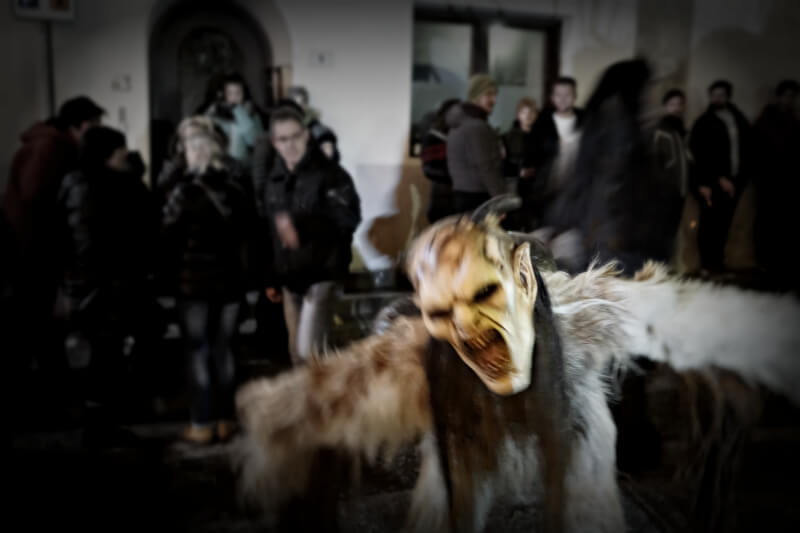 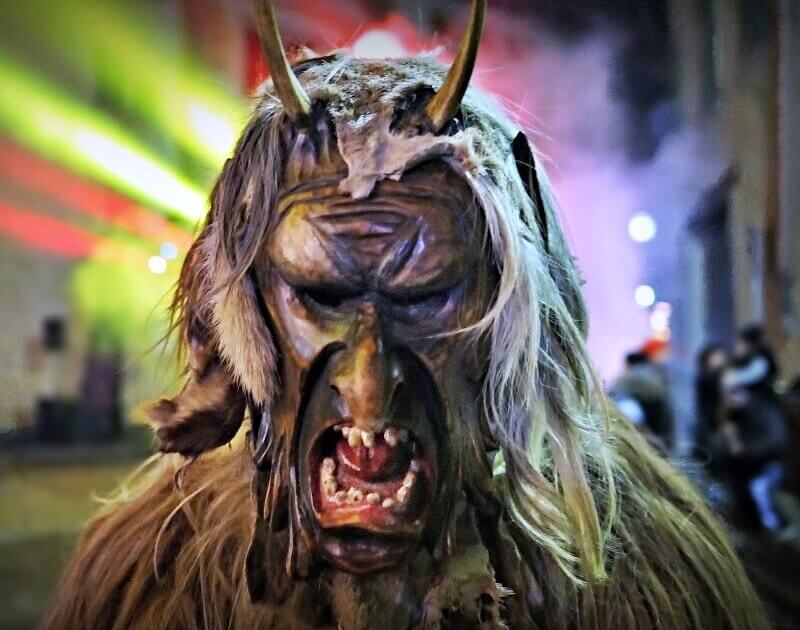 About an hour after the Krampus began their maniacal march, the roars of fire, jarring cowbells and spellbinding whirls of gothic lighting came to an end. Whatever naughtiness was left in the crowd was to be dealt with another night.

But instead of lurking back to their caverns in the mountains, the Krampus kindly posed for pictures. The chance to win over a Krampus with a smile was not something we were about to miss.

Keeping Up with the Krampus in South Tyrol

The Krampus legend originated in the Germanic regions of the Alps as a tale to encourage children to behave. According to Christian lore, they are demonic creatures, half-man, half-animal. Conquered by St. Nicholas, he demanded their obedience making them part of his legion. Whatever they are, trust us when we tell you, only the mind of Stephen King could conjure creatures more nightmarish.

South Tyrol hosts several Krampus Runs in its cities and mountain villages each year. From Ortisei to Merano to Castelrotto and many more, you can partake in this centuries-old tradition.

The largest Krampus Run in South Tyrol takes place in the village of Toblach (Dobbaccio in Italian) in the heart of Val Pusteria. Nearly 600 Krampus including those from Austria, Germany and Switzerland invade the town square for a night filled with ancestral terror.

Krampus night traditionally occurs on the eve of St. Nicholas Day. However, Krampus events in South Tyrol run from late November through early December. The dates of Krampus run can vary from year to year so be sure to confirm the event before arriving.

If you go, do not wear light-colored clothing. The characters behind the Krampus often use black makeup that can rub off on you when tussling with the beasts.

Whether you’re a fan of all things scary or not, participating in a night of Krampus debauchery is a must when visiting South Tyrol during the merriest time of year. The charm of its famous Christmas markets would not be the same without them.

How to Enjoy the Krampus Tradition With Your Holidays

If all the starry twinkles, rosy-cheeked Santas and other warm fuzzies of Christmas wear out their welcome early in the holiday season, consider inviting a little harmless mischief into your home.

Inspired by German postcards from the 1890s, Krampus: The Devil of Christmas, is a fun and fascinating book to dive into over a cozy cup of hot chocolate or Glühwein.

To give the gift of Krampus, you can also purchase vintage Krampus greeting cards that will be sure to stand out from all the other holiday cards crowding the fridges of your family and friends.

FEATURED ARTICLE: “FOREST OF THE FALLEN”